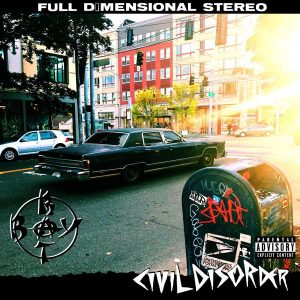 Rat Boy dropped a surprise release of 7 track project ‘Civil Disorder’ just 3 days ago. Its a different direction for Rat Boy, moving away from guitar driven Alt Rock/Punk to a collaboration of music genres.

Opening track ‘Teenage Tearaway’ tears the most away from the Rat Boy we know and love. The track is smothered in filthy drum machine beats and monophonic synth lines, but we still get the iconic Rat Boy-esque shouting rap verses. This track features Clams Casino, which reiterates the move into a different style of music.

The female vocal verse on ‘Be my Anime’ sounds unrecognisable as a Rat Boy track – but it works. The amalgamation of the raw sounds of Rat Boy vocals/ song-writing style and very clean precise hip-hop energy. For example tracks such as ‘Public Identity’ showcase a 909 drum machine coated in crunchy guitar.

‘I’m starting to feel like free speech means nothing, ‘Cause we’re fucking screaming and no one’s even listening’ – Rat Boy’s political and social awareness is shown in the track ‘Slave to the System’. It’s fresh to see an artist representing the working class in not a stereotypical punk way – yes, there are elements of the angry punk ethos, but there’s so much more than that. A whole different tone is created with the use of edited samples, drum loops and sound effects.

‘Reactions’ brings back the feeling of Rat Boy’s debut Scum – dynamic drum sounds and a killer guitar solo. However It still has a high pitch edited vocal toying with the listener – a key feature of the more hip hop influenced tracks of the album. This big chorus will really kick things off at the upcoming tour, starting on January 31st.

Album of the week